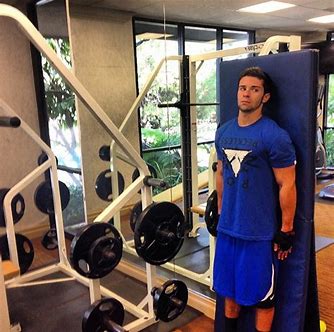 Exercising is a key component of any healthy lifestyle. But it’s easy to fall off the bandwagon and lose your fitness, only to have to start back at square one. Since the gym can be an intimidating place — even if you used to go all the time — going to the gym becomes a barrier to a healthy lifestyle.
According to trainers, feeling anxious about being unfit and having to go back to the gym is one of the most common reasons for not getting into exercise — or not getting back into exercise after time off. Luckily, since they see this phenomenon so often, trainers have some solutions for making the first few trips to the gym easier.
KNOW YOU’RE NOT ALONE
According to Kari Woodall, owner of BLAZE, feeling like you’re just not fit enough for the gym is nothing to stress about, and she’s seen many clients overcome this feeling and go on to great success. The initial hesitancy to get started happens for three main reasons that all stem from fear, she says.
Fear of failure. Working out is difficult. “It’s hard, and we fixate on the worst possible exercises and outcomes imaginable,” Woodall says. People often worry others will laugh at or judge them for not knowing how to use gym equipment, that they’ll be the least fit person in the gym, or in the case of a workout class, that they won’t be able to make it through the class. “I’ve even had clients think they’ll let me down by failing, and they’re worried they’ll waste my time,” she adds. (For the record, any good trainer will never feel like you’re wasting their time!)
Fear of getting started. “Creating a new routine is scary,” Woodall points out. “Humans like to stick with the same routines.” So usually, it feels safer to keep putting off improving your fitness. “The road to fitness can be daunting, especially if you are constantly starting and stopping,” she says. “If you’re always starting over, it’s hard physically and emotionally every single time because you aren’t sticking with it long enough to realize it is a lifestyle, not a one-time thing.”
Fear of not being as fit as you used to be. “No one wants to look at a photo from five years ago and think, ‘I’ll never look, feel or move like that again,’” Woodall says. “But we do it to ourselves constantly.” For people who used to be fit, their old level of fitness can feel practically unreachable when they first get back into it, and that can be discouraging.
STRATEGIES FOR GETTING STARTED
“Something is always better than nothing, and there is something for everyone,” Woodall says. Here’s are the strategies pros use with their clients:
1. GET THROUGH THE DOOR
If needed, start with baby steps. “You can literally walk in the gym and walk right back out — and that might be your success for the day,” says Kimber Rozier, certified strength and conditioning specialist and coach at Results Performance Training. “Maybe the next day you walk on the treadmill for five minutes or stretch in the corner. Start small and build from there.”
2. START WITH WHAT YOU KNOW
You don’t have to go straight to the weight room if you’re not feeling confident. “Stick to a piece of cardio machinery that you’re familiar and comfortable with,” suggests Maggie Winzeler, certified strength and conditioning specialist, an exercise physiologist and advisor at Fitiverse. “Get into a routine, and then consider trying your favorite group exercise class format at the beginner level. Once you’re in a routine with both the cardio machine and the class, take it up a notch and get familiar with the free weights or resistance machines.”
3. FIND YOUR GYM
“Do your research,” Rozier says. “There are gyms and classes specifically geared toward first-timers and people who have been away from the game for a while.” You can even email or call ahead of time to set up an appointment so you’re not walking in cold. If it’s in your budget, try hiring a trainer for a few sessions. They’ll be empathetic and will show you around the floor and give you workouts so you’ll have a game plan.
4. WEAR CLOTHES THAT MAKE YOU FEEL GOOD
If you’re not feeling comfortable in your body, wear something that makes you feel comfortable, Winzeler recommends. “Even fitness professionals like myself go through seasons of not feeling their most fit. For example, right now I’m recovering from having my second child. I don’t feel as confident in the tight tank tops I was wearing before getting pregnant, so I choose my most loose-fitting tops and sometimes even wear my husband’s workout shirts. It helps me get out of my head and focus on the important job of taking care of my body through exercise.”
5. BRING A WORKOUT BUDDY
“Keep in mind that working out with a partner or friend has been proven to improve exercise adherence and might help you feel more comfortable in a new gym setting or class,” Winzeler says.
6. GET TO CLASSES EARLY TO TALK TO THE INSTRUCTOR
If you’re nervous about taking a particular class, get there a few minutes early and say hi to the teacher. “Let them know it’s your first time, first week back or that you’re just a little new to this,” Rozier says. “Every group exercise instructor I’ve ever met is incredibly eager to help. They can give you modifications for certain exercises ahead of time. Make sure to let them know you don’t want to be called out in front of class, but rather would appreciate a little nod of approval every once in a while when you’re getting it right. A smart, well-informed instructor will be subtle about corrections and make you feel as comfortable as possible.”
************************************************************ 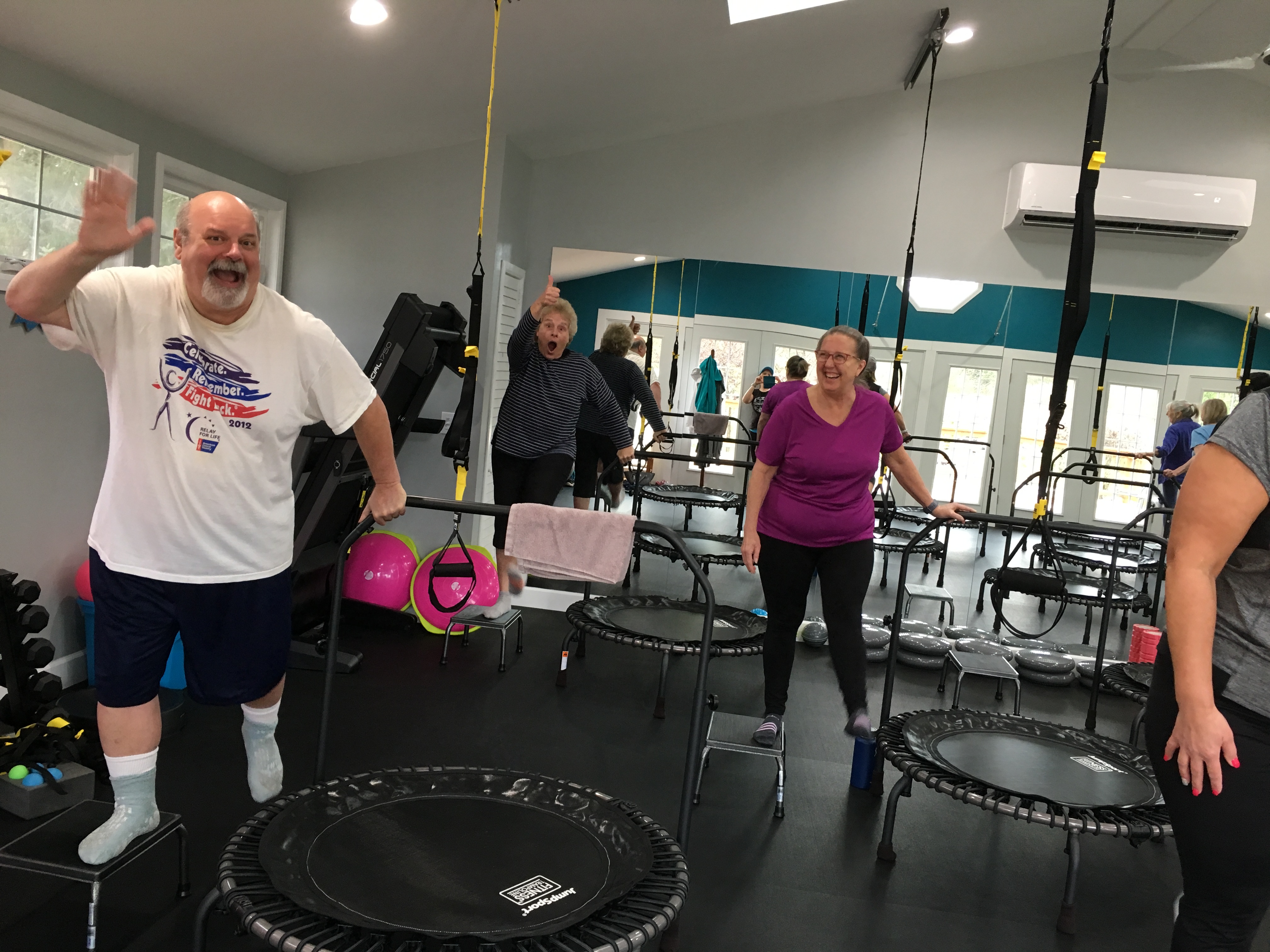 In 2017, at forty-six years of age, I began to notice subtle changes in my body. I wasn’t running my four to six miles a day as quickly as normal and in fact I became fatigued much sooner. My recovery time was longer and more and more frequently I found myself ditching my running partner so I could sleep in. Then my joints and muscles started to ache.
What began as an annoying stiffness in my lower back soon morphed into an excrutiating pain that spread to both my hips and down both legs. Unwilling to give in completely, I continued to run most days though now I was forced to take frequent walk breaks. I assured my running partner and myself that this new development was temporary and I pushed on.
When one morning I woke up and was unable to swing my legs over the side of the bed to stand, I realized that what was happening in my body was more serious. With the support and encouragement of my wife, I began the medical journey of finding out what was up. (I’ve shared this story many times as it continues to affect my life on all levels; emotionally, physically and mentally).
After many doctor consultations, injections of cortisone and my own plasma, I was forced to face the fact that I had to give up running for good. The doctors found I had been born with hip-dysplasia (yes like a dog) and I now had arthritis in both of my hips. Severe enough that walking for exercise would even be off the table for an extended length of time.To say I was devastated would be an understatement.
Eventually my legs and hips began hurting to the point I resorted to mixing several types of pain medications at one time just to ease my discomfort. But when not even this dangerous move made it possible for me to ignore the stabbing pain, I had my wife take me to the hospital.
What happened next could be a book of its own but in short, October 5th was Sandy and my fifth wedding anniversary and also the day I could have died. Which sounds so dramatic, but it is the truth. There did not seem to be any reason for me to be in so much pain. Not as far as any doctor could tell. After what would seem like an eternity, and after much persisting on my wife’s part, I would eventually undergo an MRI and finally a blood test that would show an infection in my left hip.
After surgery to remove the infection, a week in the hospital and then a month on an IV antibiotic , I would be ready for the world once again. But now everything would be different. Without my daily run to keep my weight and emotions in check, I would gain fifteen pounds and sink into depression. All this while my brand new workout studio was being built right outside my window…
It has been eight months since my surgery and I’d love to say I lost all the weight and feel great again, but that would be a lie. I haven’t and I don’t.
Some days I feel like a big fraud. Here I am training others to get fit and take care of their bodies and I still have not returned to my previous weight. I no longer rise at 5 am every day to run and do a gym workout. In fact, I now take the weekends off from gym exercise altogether! I’ve struggled with how I feel and look to the point that I’ve fallen for some of the very same gimmicks I discourage my clients from, the "Lose weight quickly" diets that I know to be both unhealthy and ultimately ineffective.
I have prided myself on my discipline to stay fit, to steer clear of unhealthy eating and to not fall into the middle-aged belly-fat fight. And yet here I am, fighting the fight…
Why am I sharing this? Because I want you to know that I am in the same boat as you. I’ve worked my whole life at this weight and fitness thing. Having a career in fitness has only made me more conscious and at times self-conscious of how I live and how I appear to others. But I’m not giving up. I won’t do that and I don’t want you to either. We don’t have to be models in a magazine or the next uber-triathalete, but we can be the healthiest, happiest versions of ourselves. And I would love nothing more than to work along side you to achieve your goals, OUR goals.
The stresses of life can be heavy, but together we can at least take thirty minutes a day to lay them aside and workout together.
Join me at Fit Over Forty today!
Lorinda