Train This, Not That: The Core Edition 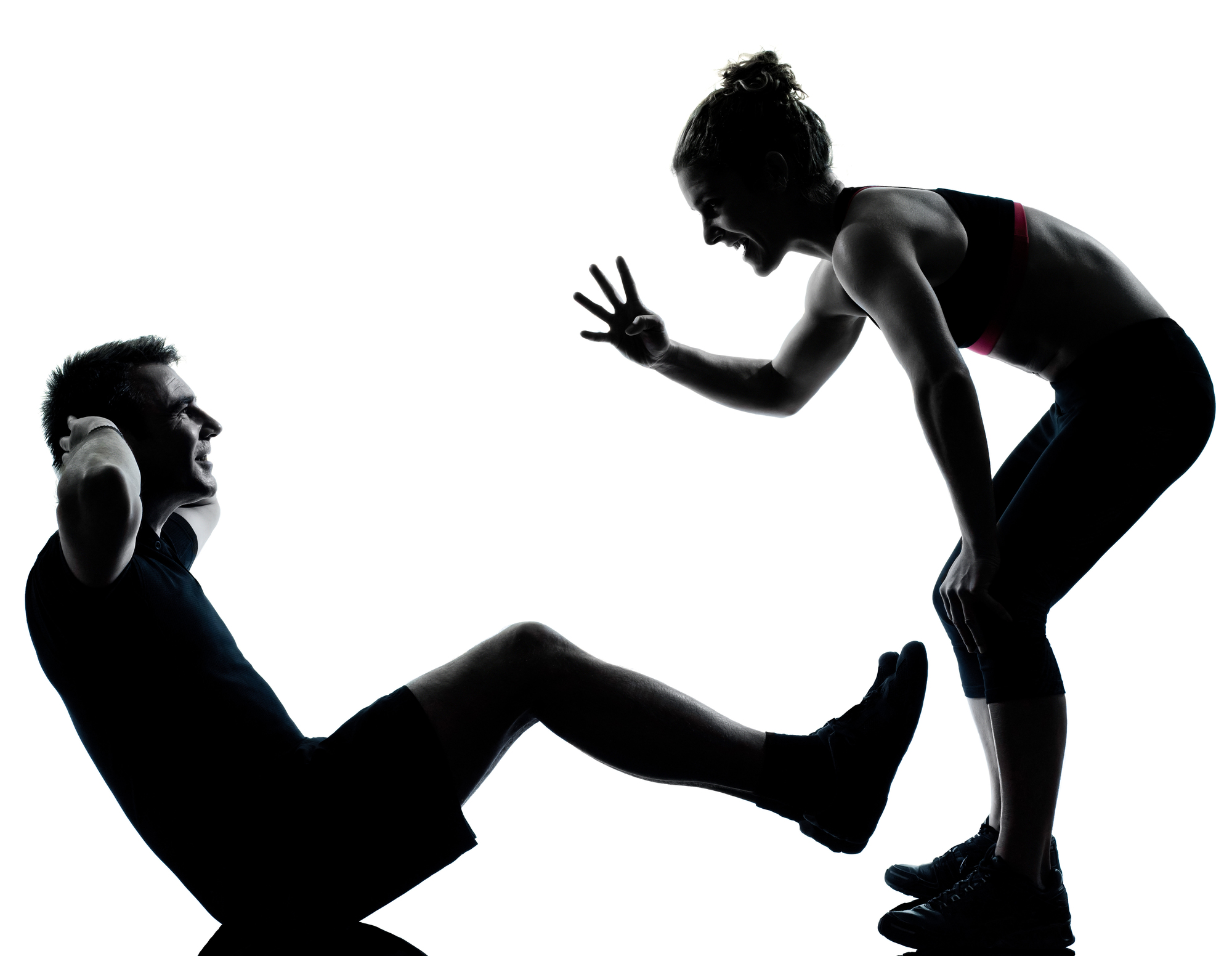 Why do you do core training? To get better abs? Support your back? Improve your athletic performance? Maybe all of the above! When doing any type of core strengthening, it is important to ask yourself why you do each movement, and to weigh the risk vs. benefit of the exercise you have selected.
Unfortunately, people do various core exercises with the hope of shrinking their midsection, when in reality they could be putting pressure on various parts of the back. Let’s take a moment to review some common core exercises, why we do them and safer
alternatives.
1. Sit-ups

Sit-ups can place large amounts of stress on the lower spine and neck and do not target the deep abdominal muscles such as the transverse abdominis. In a study published in 1995, Dr. Stuart McGill, professor of spinal biomechanics at the University of Waterloo, Ontario, found that bent- and straight-leg sit-ups placed more than 674 pounds of strain on the lower spine, which can lead to herniated discs and nerve damage.
Goal: Strengthen the anterior chain (front side of the body), build better abs and enhance athleticism
Replace With: The McGill Curl-up

Dr. McGill identified three exercises (known as the “Big Three”) that focus on core strength and stability, while putting a minimal load on the spine.
The McGill Curl-Up, one of the “Big Three” exercises, differs from a crunch in that there should be no movement from the lumbar spine so as to protect the discs and promote proper posture. Begin by laying flat on your back with only one knee bent. Place the hands under the small of the back to monitor movement, ensuring your back does not touch the floor. Brace the core muscles as if you were about to be punched in the stomach and lift the head and tops of the shoulders, keeping the spine in neutral. For an added challenge, lift the elbows off of the floor. Try this for six to 10 holds, each lasting 10 seconds.
2. Back Extension Machine 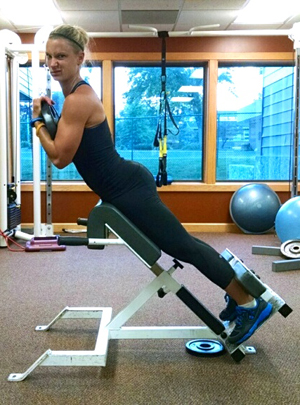 The problem with this machine is that the hips are locked into place. Because of this hip immobility, all of the stress is placed on the lumbar spine, which is not designed to handle heavy loads. This stress is amplified when weight is added.
Goal: Strengthen the posterior chain (backside of the body)
Replace With: The Bird Dog

The bird dog is a co-contraction of one leg and the opposite arm in the quadruped position. Begin by posturing the spine in neutral, with the hands directly underneath your shoulders and the knees directly underneath your hips. Find neutral spine and gently brace the core. Sweep the floor with the hand and the knee after each 10-second hold. Repeat four to six times on each side.
3. Side Bends 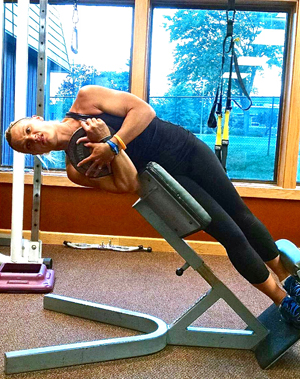 The discs of your spine serve as the cushioning between each vertebral segment. The soft center of these discs can be likened to a jelly doughnut—if too much pressure is put on one side, the jelly will be squished out! With too much force loaded on the side of the spine during a side bend, these discs are at a greater risk of herniation.
Goal: Strengthen the side musculature of the body
Replace With: Side Bridge (Side Plank)

The side bridge is another one of McGill’s “Big Three” exercises. Line the elbow up with the shoulder, and the shoulder up with the hip and heel. With a very tight and braced core, push the ground away from you, staying active in the shoulder joint. Hold for 10 seconds and repeat four to six times. To reduce the intensity, perform this exercise from the knees instead of the feet.
4. Partner Leg Slams 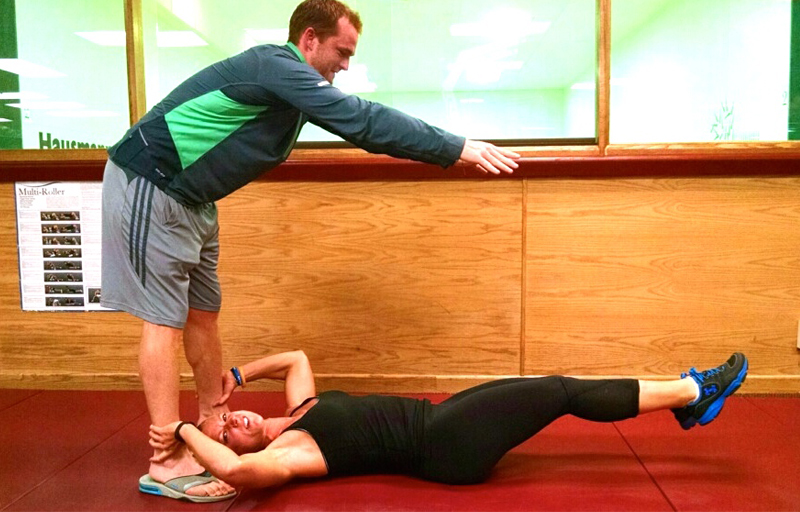 Remember grabbing onto a partner’s ankles and having them throw your feet down toward the floor in gym class? I do. I also remember my back hurting afterward. These throw-downs can cause excessive extension of the spine and can be harmful for the lower back.
Goal: Abdominal strength and eccentric control
Replace With: TRX Resisted Leg/Heel Raises 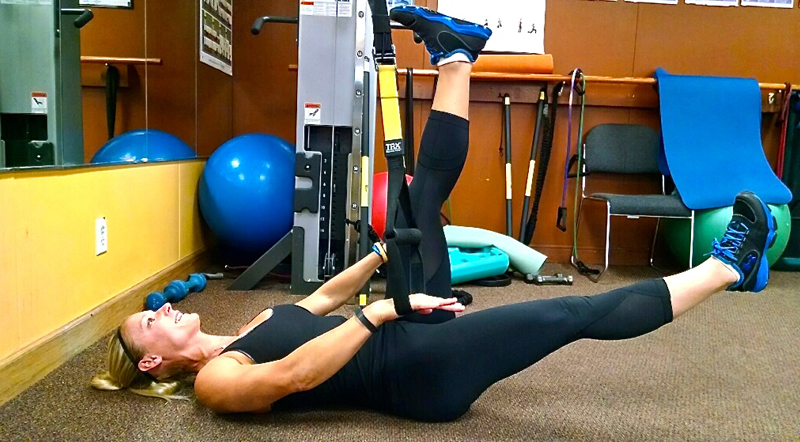 A much better option is the TRX resisted straight-leg raise. Lay on the ground facing the anchor point; place both hands in the foot cradles and press down. While keeping your core braced, slowly lower one or both legs toward the ground until just before the low back raises up. Return to the starting position while keeping pressure down in the hands. Perform two 30-second sets of this exercise.
5. Plank Challenges

If anybody encourages you to hold a plank for four minutes, just say “No!”
Planks held for an extended period of time lose their value and result in poor posture.
Goal: Support the spine and strengthen “nature’s corset”
Replace With: Short and Challenging Planks

For maximum strength and endurance gains, hold tighter, more active planks for a shorter period of time. With the forearms on the ground and elbows directly under the shoulders, brace every muscle of your body (especially those glutes!) and hold a perfectly straight line for 10 seconds on, two seconds off, for four to six sets. If you cannot complete a 10-second plank without the hips sagging, move your knees to the ground.
The purpose of these exercise swaps is to be mindful about your exercise selection and to choose the safest option for you. Do people still do crunches without getting injured? Of course, but I wish I had known about the McGill Curl-up as a young athlete. Remember, a lot more goes into getting a tight and defined midsection than simply doing abdominal exercises. A healthy diet and plenty of sleep are both essential to creating a better athlete and a better body.